After living in the USA for 11 years I've heard some questions over and over and now is a perfect time to answer them.
1. Are Ukraine and Russia the same country?
- No. Ukraine is an independent sovereign country with its own established territory, thousand year history, culture, traditions, and language.
2. But Ukraine was part of Russia, wasn't it?
- No. Ukraine has never been part of Russia. I don't know why, but people think that the Soviet Union was Russia. It is not true. The Soviet Union was a union of 15 countries. Russia was just one of the 15 that established "friendly" dictatorship and control over 14 others. The goal of Russia was to wipe out the national identity of the nations by destroying their ethnic, linguistic, and cultural background. Somehow in Ukrainians Soviet Russia saw a bigger danger than in other nationalities and decided to kill them by starvation. You can find a lot of information online about 1932 -1933 Holodomor (the Great Famine). The estimated death toll is 7 - 10 million Ukrainians.
3. Are Ukrainian and Russian basically the same language?
- No. I don't know why people understand that Spanish and Portuguese are different, Russian and Polish are different, but they question Ukrainian and Russian.....Ukrainian is not a dialect of Russian either. Most Ukrainians understand, speak and read in Russian because our grandparents were forced to speak Russian, our schools were in Russian, our documents were in Russian. When I was in elementary school out of 30 students only I and a few others spoke Ukrainian because it was not common. Soviet Russia did all that was possible to wipe out our language.
4. How Ukrainians can fight their own people in the Luhansk and Donetsk regions?
- All the world knows how dirty Putin's politics are. Everyone knows that he is a liar. If you want to believe his lies, it is your choice and I can't do anything about it. The truth is: in 2014 Putin invaded two eastern regions of Ukraine claiming that the population wanted his protection. He destroyed cities, killed civilians and paid a few traitors to make a show. Most of the population evacuated to the other parts of Ukraine looking for new jobs, housing, and peaceful life.
5. But what about Crimea?
- As a child I spent a lot of summers in the autonomous republic of Crimea. It was a great place to visit and relax on the seashore. I have never heard indigenous people of Crimean Tatars complaining that Ukrainians are persecuting them and they need Russian protection. Can you imagine Puerto Ricans complaining that Americans persecute them and they need Cuban protection?
6. Are your family and friends in Poland now? (The question that I heard a lot last week)
- I don't know if people understand how big Ukraine is. The population of Ukraine is 44 MILLION! Yes, since last week a lot of Ukrainians fled the country because of the Russian invasion but there is no way for so many civilians to exit the country during the war. I have only one relative with her little daughter who crossed the border after the Russian invasion. The rest of my family and friends are in Ukraine.
​
Also, I would like to say that I am very proud of my country. We LOVE freedom! We love to be free and we love people who want to be free. We didn't invade or occupy anyone's territory, we're just protecting our land and our nation. 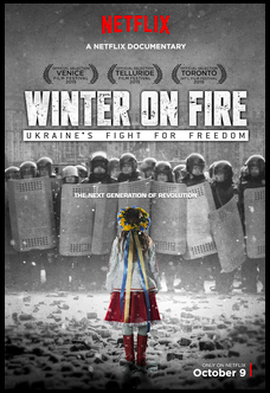 Watch this very informative documentary that explains why this attack in Ukraine by Russia is happening today.  First you have to go back to 2013 and 2014.

"In just 93 days, what started as peaceful student demonstrations became a violent revolution. Netflix documentary Winter on Fire brings you the story of Ukraine's fight for freedom from the frontlines of the 2014 uprising."