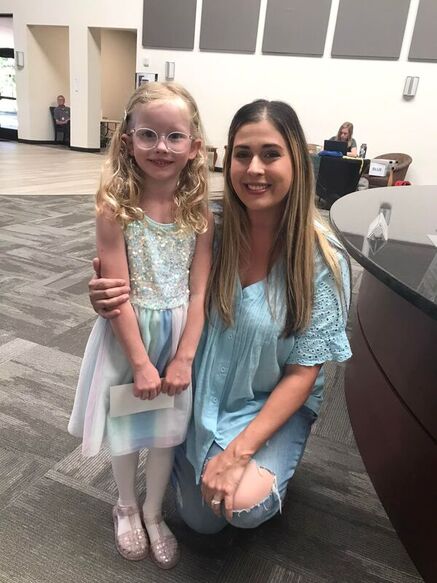 With the war in Ukraine, it is hard to post all the horrific realities coming out of the country we love so much. Like most of society, we find ourselves overwhelmed with the situation. As an NGO, it’s our responsibility to report to you all that is going on and the active work we’re doing.

Honestly though, in the past few months, it’s been a challenge to keep updated information on our FB and Instagram page. Stateside, we do not have a lot of volunteers and often most of the work falls on a handful of shoulders. Social media is a bucket that has to suffer because of our other obligations.

In this overwhelming time, I had a breath of fresh air and a beautiful meeting a few weeks ago. A sweet 6-year-old named Sydney and her mom Marissa visited me at church with a special message.
Sydney had heard about the atrocities happening in Ukraine and her heart was so saddened by the stories of the dying and suffering of so many children. Her heart led her to “do something “ and not be apathetic like so many of us are.

Sydney and her mom baked bread and sold the loaves and decided to donate their earnings to UOO. How beautiful is that! It brought me to tears as she handed me the sandwich bag filled with bills that added up to a sizable donation.
Sydney and her mom's heart to help in a way like this is huge! It shows that we can ALL do SOMETHING to help our Ukraine brothers and sisters.
​
Having Sydney help us in this way honestly gave me that needed “kick” to stop being stagnate and overwhelmed, but to take it one moment at a time, one day at a time, but to always be working to “DO SOMETHING”, because if we all act like Sydney as she demonstrates what the church of Christ should look like, our world will be a better place!
Thank you Sydney and Marissa for being a reminder of what it means to emulate Christ. 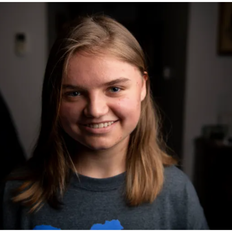 Meet Angelica.
We are so touched by her heart to help Ukraine by raising funds in so many special ways. Angelica is an adopted girl from eastern Ukraine that has turned her broken heart into "doing something".

Angelica  was adopted a little over 5 years ago from the Donetsk region of Ukraine. She remembers all too well the scary times of Russia occupying her birth city of Kramatorsk back in 2014. She remembers being taught at the orphanage to watch for land mines and practicing safety drills. She was at an orphanage in Kramatorsk before being moved to Emerald City where she stayed until her new forever family came to take her home. She was 12 years old when Christy and Jason, practically strangers to Angelica, came to ask if she wanted to be adopted into their family of 4 biological children. Even though she did not know her new family, she knew she wanted to be rescued into safety and love.

In February, when Russia invaded Ukraine again, Angelica struggled with feelings of guilt and worry for her friends and family in Ukraine. She knows that the orphanage she called home was near a military base and was not that safe for the hundreds of orphans who live there. She was having nightmares and told her mother that she wished she were in Ukraine to help her people. One morning as her mother was praying, God gave her an idea to make magnets of the Ukrainian flag and sell them for donations. This was a creative way for Angelica to help her country and her people from a distance. Angelica loved the idea and got to work immediately designing magnets with the Ukrainian flag and sayings in Ukrainian and English. After Angelica’s grandma started mass production of the magnets, Angelica started designing bookmarks as well.
Angelica’s mom started calling around to ask businesses if they would be willing to display the magnets and bookmarks. We hoped to raise $300 for Ukraine Orphan Outreach. To date, $1,029.50 has been raised and there are still businesses who have magnets and bookmarks.

We continue to be inspired by people like her. 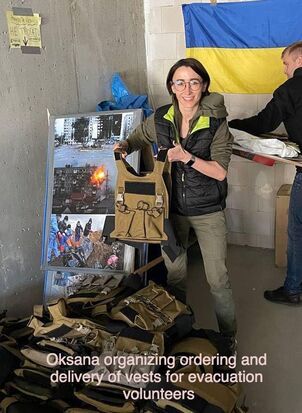 Hero: a person who is admired or idealized for courage, outstanding achievements, or noble qualities.

Warrior: a person engaged or experienced in warfare

Courage: strength in the face of pain or grief.

The incredible and selfless acts of this courageous warrior and hero are changing lives forever! Oksana exceeds these definitions on a daily basis, by simply being herself. By making herself known to everyone she is in contact with that she is ready to serve and put herself last, she is living out the heart of Christ.

From the earliest moments of the invasion Oksana immediately accepted the role of evacuation coordinator for UOO and many other friends and partners, braving back into Kyiv for more people when she was already “safe” in western Ukraine with her family. That was only the beginning of this last month and a blur of border crossings into Poland whereby we have seen miracle after miracle unfold with one hand on the phone and one hand on the wheel of her first and recently purchased VW jetting to the rescue.

Once truly safe in Warsaw, her days are now filled with organizing relief supplies, medicine, returning Ukrainian men to fight, and most importantly connecting spheres of influence which are moving mountains. Oksana is constantly returning into Ukraine for her driving role, which is small compared to the coordination role of evacuation for countless refugees. displaced, disadvantaged children, pregnant women, elderly, orphaned, and even the reunification of a family dog thought to be lost. The intense focus and pace required to be orchestrating all of these details in the face of such grief, pain and loss is a testament to Oksana’s fortitude and unwavering loyalty for defending the cause of the least.

Oksana is an example of how we as Christians “keep our brother.” It starts with a willingness and openness to hear each story and opportunity with a mind to actually respond and look past all conceivable obstacles. Oksana shows us with every ounce of energy, asking moment and in every transaction how there is no time now to waste.

Already weeks into the invasion she made the statement to us hoping people understand that “now is not the time for emotions and romantics, we have only time to act, for lives are at stake!”

Thank you, Oksana for giving us a living example that we can take to heart in our daily lives! 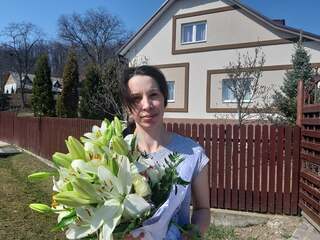 The word "hero" comes from the Greek ἥρως (hērōs), "hero" (literally "protector" or "defender").
When we think of a protector and defender, our hero that comes to mind is Lena. On March 24th, we celebrated Lena's birthday as we sent her a big congratulations and love from all of us!

Let me tell you a bit about Lena and why we believe she is a hero in Ukraine. Lena is the house mom for the boy's home in Kramatorsk. We have known Lena for almost ten years now and during that time, we have learned about her heart and grown to love her deeply. Lena has shared her desire to help others in selfless acts in her home and community. She is a JOYFUL servant, even though the task at hand is very difficult and overwhelming.

She is always PRESENT with those that the Lord has put in her life, giving of herself to assure others are taken care of. Despite her very tumultuous upbringing and coming from very hard places, Lena has broken the chains of her past to be able to serve and speak to others of the truth of HOPE found in our Lord, Jesus. We love Lena so much and continue to pray for her strength, health, heart, and outlook of what the future may hold.

We are so grateful to report that Lena and her husband Maxim, along with family have been able to escape from Kramatorsk and are safely staying at a church in a bordering country.